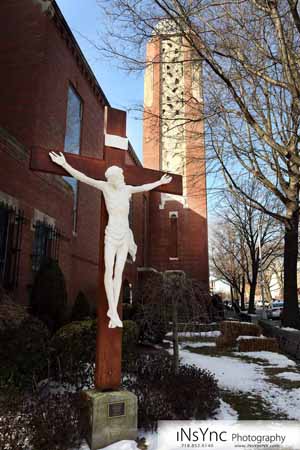 Founded in April of 1922 by Bishop Molloy, the first pastor of the new parish of Saint Anselm was Father James J. Smyth. Three names as parish patrons were suggested: Sacred Heart, Epiphany, and Saint Anselm. The dedication to Saint Anselm was chosen because other parishes had already been established in the Diocese bearing the first two titles and as a way of honoring Bishop Molloy’s alma mater, Saint Anselm College in New Hampshire. The parish was created out of land previously part of the parishes of Saint Patrick (established in 1849) and Our Lady of Angels (1891). The boundaries of the parish extended from 78th Street to 88th Street and from the water to Fort Hamilton Parkway. To the east the parish bordered Saint Ephrem’s (1921).

Bay Ridge was a rural community before World War I. Third Avenue was the main thoroughfare. Large estates and shorefront hotels and clubs were situated below the avenue down to the bay, and small farms dotted the landscape. Trolleys running along 3rd provided the principal public transportation.  The extension of the subway to 86th Street in 1916 and to 95th Street in 1925 initiated an intensive period of development. Fourth Avenue assumed new importance, being paved following the completion of work on the subway and provided with electric lighting, in place of gas lamps. The large estates below Third Avenue were split up and developed as housing, while Fourth Avenue became largely lined with apartment buildings.

Father Smyth purchased the present parish property on Fourth Avenue, on May 23rd, 1922, as an ideal central location for the church.  Additional land was donated. The first Mass was celebrated in the parlor of the residence of Mr. and Mrs. Thomas Fitzgerald on Sunday, June 4, 1922, at 81st and Colonial Road. Over two hundred people were in attendance. Very quickly four Sunday Masses became the norm. The library table, which served as the first altar for the parish, is in the present Sacristy. After accepting the gracious hospitality of Mr. and Mrs. William Robinson for the summer, Fr. Smyth purchased a house on 83rd Street, where the convent now stands, as the first rectory for the parish. Daily Mass was said there at 7 AM. The first marriage (August 9th) and the first baptism (August 13th) in the parish were also held there.

The construction of the first church, on 83rd Street, was a priority of the parish. Funds were raised by holding card parties and bazaars. Contributions from the parishioners, some very generous, were also of great importance. The architect of the church was Robert Reiley and the builder was William Flanagan, a parishioner.  The church was ready for use by the summer of 1923. The intention was that the building would eventually serve as the auditorium of the school structure, erected around and above it, once a new church could be erected. Construction on the school, staffed by the School Sisters of Notre Dame, began in October of 1926, and the first class entered in September 1927. In recognition of her many years of selfless service to the school, as a teacher and principal, this auditorium, the “first church”, was dedicated to the memory of Sr. Eileen Mary McMahon in September 2008.

With the construction of the new convent in 1941, the rectory in 1942, and, owing to delay caused by World War II, the new church in 1954, the Saint Anselm parish complex attained the appearance known to parishioners today.

Thanks to the priests, deacons, religious, the School Sisters of Notre Dame, educators, and lay ministers, Saint Anselm Church has continued to fan the flame of faith, instill respect for academic excellence, and encourage civic involvement for more than ninety years.

In a continuing effort to ensure the health and safety of the parish and our parishioners,  we have hired Germinator Mobile Sanitizing to regularly sanitize the church, as displayed in these videos.